Roger Lane, who has died aged 70 from a long and debilitating illness, liked to be busy. After National Service in the RAF at Oswestry as a Drill Instructor and a short spell with The Inland Revenue in Ely, most of his working life was spent with CJR Fyson and Sons Ltd with which he travelled extensively. He was an active member of the local community and at various times was involved with The College Players, Cub and Scout gang shows, Soham Carnival Committee as well as local cricket and football teams.

For more than 25 years, from the early 1970s Roger was associated with youth work. Firstly, running church hall discos and youth clubs before moving on to the 14-18 Project at the Lode Centre. At points during his life he was a member of Ely and District Round Table, a school governor, a Town Councillor and, for many years organised the annual Grammar School Old Boys Dinner. He was involved in Soham Sports Hall from inception to completion and served on the committee for 21 years.

In his spare time Roger loved his garden, was a keen photographer, a doting granddad and enjoyed cruising along the waterways of East Anglia with Anne and the dogs in their canal boat.

He is survived by wife Anne, sons Philip, Mark and Jeremy and grand-daughters Martha and Billie.

May he rest in peace.

Roger Lane takes a very active part
in Soham, the town in which he lives.
via Anne Lane 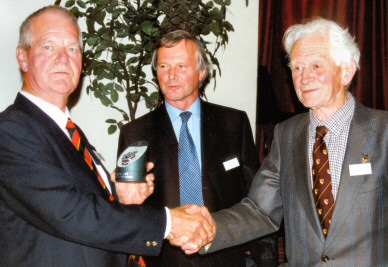 2003 Dinner - the last he attended - Roger receives
a watch from Arnold Tomalin (R) with Chris Bent (1953) looking on
image: Haslam

If you have further appreciations or photos to add to this page on Roger, please contact the website editor.
page last updated 4 Oct 2009